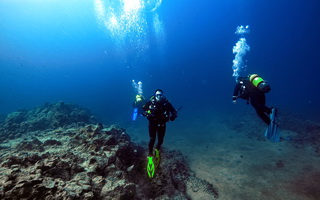 El Emisario is a divesite in Playa Blanca in the south of Lanzarote. There are 2 extensive tubes that make orientation very easy and mark entry and exit. The dive guides you along a massive lava tongue down to max. 18m. This lava formation is used as a haven for many species that represents the fauna of the Canaries.

This divesite in Playa Blanca is popular with a variety of species of rays and angel sharks. Pay particular attention to the many overhangs and crevices which often play host to beautiful anemones, cleaner shrimp, moray eels and slipper lobster. At the end of the rock is a small cliff, where you can find dusky grouper, moray eel, island grouper and the majority of the collective sea life in the Canaries. The contrast between the rock and the sand allows you to see species from both environments at a depth less than 20 meters!

If you want to dive this divesite, drop us a line and we will arrange something.

Manage Cookie Consent
To provide the best experiences, we use technologies like cookies to store and/or access device information. Consenting to these technologies will allow us to process data such as browsing behavior or unique IDs on this site. Not consenting or withdrawing consent, may adversely affect certain features and functions.
Manage options Manage services Manage vendors Read more about these purposes
View preferences
{title} {title} {title}